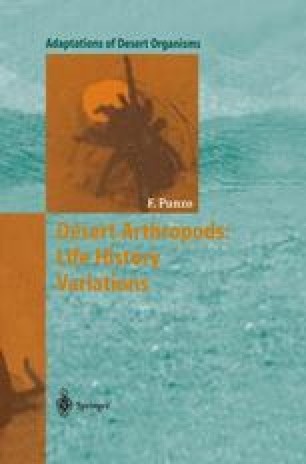 This elegant and dramatic description of the emergence from its egg of the “tiger of the desert” following completion of its embryonic development is one of the most colorful expositions to be found in the natural history literature. What manner of beast is Hingston referring to? It is a description of the hatching of the solifuge Galeodes arabs, although it could equally apply to many types of arthropod postembryos. The life history of an animal begins with the embryo following fertilization, and I will discuss some of the salient features and main themes of embryonic development in desert arthropods and how they are related to life history parameters. For a more detailed discussion of the descriptive embryology of specific groups of arthropods the reader should consult: insects (Johannsen and Butt 1941; Waddington 1956; Anderson 1966; Chapman 1971; Agrell and Lundquist 1974); spiders (Wallstabe 1908; Holm 1940, 1952; Seitz 1966, 1970; Savory 1971); scorpions (Laurie 1890; Mathew 1956; Kastner 1968; Anderson 1973); pseudoscorpions (Weygoldt 1969; Brusca 1975); whipscorpions (Dawydoff 1928; Werner 1934); mites and ticks (Baker and Wharton 1952; Kume and Dan 1957; Savory 1977), solifuges (Bernard 1896; Birula 1904; Kastner 1952; Van der Hammen 1989), and myriapods (Johannsen and Butt 1941; Kume 1957; Kastner 1968; Blower 1974; Lewis 1981).

Malpighian Tubule Germ Band Vitelline Membrane Terrestrial Arthropod Zygote Nucleus
These keywords were added by machine and not by the authors. This process is experimental and the keywords may be updated as the learning algorithm improves.

“Thus commences the life of this desert monster. First a glowing opalescent sphere, then a bursting of the fragile coat, then a slow unfolding of the embryo which reveals a rudiment of the solifugid shape. How simple it looks in its infant form, so harmless while deprived of its forbidding features, so helpless in its state of motionless collapse, so tender in its pallid swaddling dress. There it rests peacefully on the desert sand with the glittering remnant of its opalescent skin lying rejected by its side. How delightful are the earliest beginnings of its existence! Who would imagine that the tiger of the desert came out from this glittering pearl?”