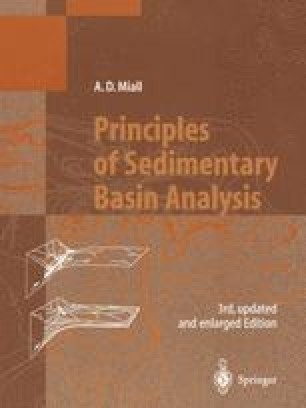 One of the main messages of this book is the need for synthesis of many types of data, so that, in conclusion, it may be useful to re-emphasize some of the ideas I have tried to convey and perhaps clarify the structure of the book. The organization of the chapters is intended to reflect an increasing complexity of information and sophistication, corresponding to more advanced levels of basin analysis. However, it by no means reflects the way in which all basin analyses are carried out. In mature basins, the analyst may be faced, at the start, with a proliferation of old stratigraphic names. Sorting out the validity of these, their relative ages, facies interpretations, and paleogeographic evolution will consume the first round of analysis (Chaps. 3–6). Proceeding to backstripping analysis and models of crustal rheology (Chap. 7), interpretations of stratigraphic sequences and their causes (Chaps. 6 and 8), and plate-tectonic setting (Chap. 9) may come much later. For many basins, plate tectonics may seem irrelevant. For example, those working on the Alberta Oil Sands or the coal-bearing sequences of the Illinois Basin may regard plate tectonics as a very remote concern. Yet, this is not a wise approach to take. We have seen how plate-margin tectonism may be transmitted for thousands of kilometers across a cratonic interior, and we have seen how large-scale stratigraphic architecture can be controlled by eustatic sea-level changes that depend largely on spreading rates in far-away midoceanic ridges. It is a mistake to define too small an area as one’s focus of interest. This can lead to serious problems, ranging from questions of stratigraphic correlation to erroneous interpretations of plate history. This point was convincingly argued by Dewey (1982) in his discussion of the evolution of the British Isles. His interpretive maps of this small area extend from Mexico to Russia.

Carbon Capture Plate Tectonic Fore Land Basin Seismic Stratigraphy Basin Analysis
These keywords were added by machine and not by the authors. This process is experimental and the keywords may be updated as the learning algorithm improves.
This is a preview of subscription content, log in to check access.