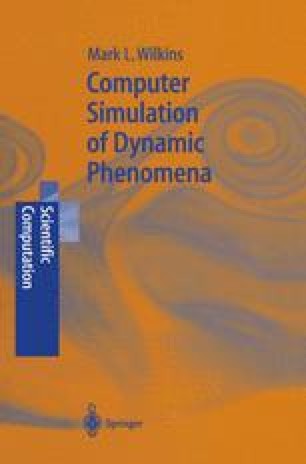 When large relative displacements occur in fluid dynamic calculations that are formulated in Lagrange coordinates, a decoupling of grid points must be provided to allow slippage of one grid on the other. A sliding interface is a line or a surface defined by a set of Lagrange coordinates. In two dimensions the interface is a line defined by j, k coordinates and in three dimensions the interface is a plane defined by i, j, k coordinates. In the method employed here, a set of grid points associated with one side of the interface defines a line or surface on which the grid points of the opposite side can slide. The process is then reversed. Grid points associated with both sides of the interface are tagged as either void open or void closed. The void open condition means there is a gap or void between the given point and the surface opposite it. The acceleration of void open points follows the same logic as a free surface point. Void closed points are defined as points that are in contact with the interface between the two grids. The acceleration of void closed points is broken into components perpendicular and parallel to the interface. The perpendicular component of acceleration includes the mass of the materials from both grids. The parallel component of acceleration only includes the mass of the particular point being considered. The stresses of one grid provide boundary conditions for the opposite grid. Both sets of points on the interface are accelerated by the same procedure, i.e., the motion of points on one side of the interface includes the stress and mass from the opposite side and vice versa. When penetration of a grid point through the surface of the opposite grid occurs, the velocities of the interface grid points of both grids are adjusted to conserve angular and linear momentum. The symmetry of the calculations is especially useful in vector programming and in addition permits sliding to occur simultaneously in more than one direction. After grid points on each side of the interface have been advanced an integration time step, one set of grid points is declared a slave grid and the other a master grid. All slave points that have penetrated the master grid are set onto the master surface. Provision is made for opening a void for a previously void closed point if the acceleration is in the direction away from the opposite grid and the stresses acting on the point from the opposite grid are tensile. When this condition occurs, the point is tagged void open and free surface boundary conditions are applied.

Grid Point Extension Point Free Surface Boundary Condition Void Status Master Surface
These keywords were added by machine and not by the authors. This process is experimental and the keywords may be updated as the learning algorithm improves.
This is a preview of subscription content, log in to check access.