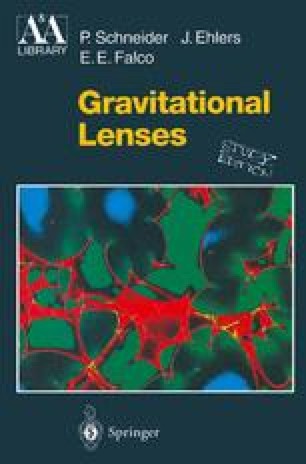 If the light emitted by a source is deflected by a single matter concentration in the universe, the theory for a single geometrically-thin mass distribution as developed in Chap. 5 applies. However, one can easily imagine situations where the light is deflected several times on the way from the source to the observer. For example, a distant QSO might be lensed by two galaxies at quite different redshifts; in particular, in the spectra of high redshift QSOs, one often finds absorption lines which correspond to intervening matter at several redshifts. If the absorbing matter forms part of a sufficiently large mass concentration (e.g, a galaxy), the multiple absorption lines could indicate that the light from the QSO is deflected more than once. In addition, microlensing need not be confined to objects at a single redshift. Furthermore, if the clumpy universe described in Chap. 4 does approximate the matter distribution in our universe, clumps at all redshifts will influence light propagation. We describe numerical studies of this process in a later chapter. As it turns out, the multiple lens-plane theory ([BL86.1], [K087.5]) is very convenient for the study of light rays (and bundles) through a clumpy universe.

Deflection Angle Source Plane Single Lens Quadrupole Lens Lens Plane
These keywords were added by machine and not by the authors. This process is experimental and the keywords may be updated as the learning algorithm improves.
This is a preview of subscription content, log in to check access.