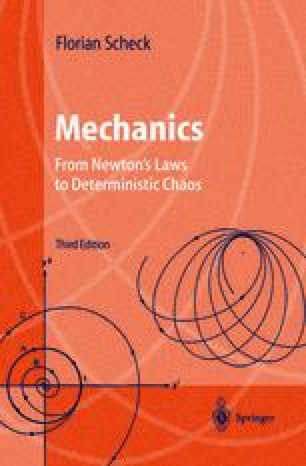 The Mechanics of Rigid Bodies

The theory of rigid bodies is a particularly important part of general mechanics. Firstly, next to the spherically symmetric mass distributions that we studied in Sect. 1.30, the top is the simplest example of a body with finite extension. Secondly, its dynamics is a particularly beautiful model case to which one can apply the general principles of canonical mechanics and where one can study the consequences of the various space symmetries in an especially transparent manner. Thirdly, its equations of motion (Euler’s equations) provide an interesting example of nonlinear dynamics. Fourthly, the description of the rigid body leads again to the compact Lie group SO(3) that we studied in connection with the invariance of equations of motion with respect to rotations. The configuration space of a nondegenerate top is the direct product of the three-dimensional space ℝ3 and of the group SO(3), in the following sense. The momentary configuration of a rigid body is determined if we know (i) the position of its center of mass, and (ii) the orientation of the body relative to a given inertial system. The center of mass is described by a position vector r s (t) in ℝ3, the orientation is described by three, time-dependent angles which span the parameter manifold of SO(3).

Angular Momentum Angular Velocity Rigid Body Principal Axis Inertial System
These keywords were added by machine and not by the authors. This process is experimental and the keywords may be updated as the learning algorithm improves.
This is a preview of subscription content, log in to check access.