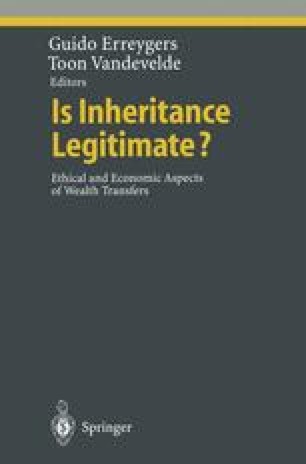 Nothing Wrong With Unearned Wealth? A Comment on Haslett and Bracewell-Milnes

Both David Haslett and Barry Bracewell-Milnes dare to stick their necks out and do so in an articulate, thoughtful way. I like that. Not because I love chopping heads off, but because I strongly believe that an active involvement in public policy debates is an essential part of a scholar’s role in today’s society. Moreover, I have great sympathy for Haslett’s impatience with the great inequalities in life chances that result from a massively unequal access to external assets, while at the same time coming close to embracing Bracewell-Milnes’s rejection of the “short-termist, brash, materialistic, aggressively individualistic” market rat race in favour of a “more traditional and stable way of life, more long-termist, more family-oriented, less materialistic, more attuned to spiritual and ethical values, cool or contemptuous towards competitive spending, sympathetic towards conservation and preservation” (Bracewell-Milnes, 1997, p. 199). And yet, I deeply disagree with both. Why?

Distributive Justice Productivity Conception Unequal Access Productivity Criterion Educational Expenditure
These keywords were added by machine and not by the authors. This process is experimental and the keywords may be updated as the learning algorithm improves.

This is a revised version of an oral comment on the papers presented in Antwerp on 8 November 1995 by David Haslett and Barry Bracewell-Milnes.