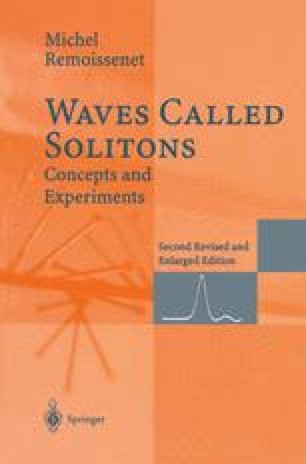 In the near future nonlinear optics should probably revolutionize the world of telecommunications and computer technologies. With lasers producing high-intensity and short-duration optical pulses, it is now possible to probe the interesting, and potentially useful, nonlinear effects in optical systems and waveguides. Among the guiding structures, the optical fiber is an interesting (Gloge 1979) and important device (Mollenauer and Stolen 1982; Doran and Blow 1983). In an optical transmission system using linear pulses, the bit rate of transmission is limited by the dispersive character of the material, which causes the pulse to spread out an eventually overlap to such an extend that all the information is lost. To overcome this limitation Hasegawa and Tappert (1973) proposed to compensate the dispersive effect by the nonlinear change (Kerr effect) of the refractive index, or dielectric response, of the fiber material. When the frequency shift due to the Kerr effect is balanced with that due to the dispersion, the initial optical pulse may tend to form a nonlinear stable pulse called “an optical soliton” which in fact is an envelope soliton. This prediction and subsequent observation of optical-solitons propagation (Mollenauer et al. 1980) in a single fiber has stimulated theoretical and experimental studies on nonlinear guided waves. The exploitation of the typical nonlinear effects in optical devices has led to the demonstration of various (quasi) soliton properties. The consequences for future long-distance high-bit-rate communications systems are the subject of much study (Mollenauer and Smith 1988).

Optical Fiber Optical Pulse Modulational Instability Kerr Effect Dark Soliton
These keywords were added by machine and not by the authors. This process is experimental and the keywords may be updated as the learning algorithm improves.
This is a preview of subscription content, log in to check access.