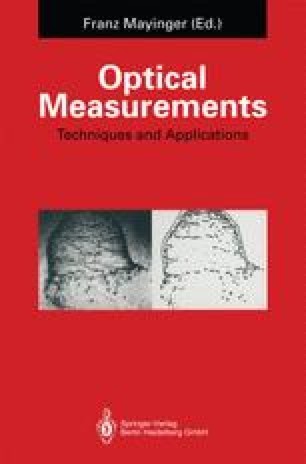 Introduction to the Schlieren and Shadowgraph Method

A transparent object which attenuates transmitted light in dependence of its inner structures is called an “amplitude object”. Our eyes as well as photographic films respond to changes of brightness and, therefore, it is possible to image such objects directly on the retina or on a film (example: bright-field microscopy). The structures of an object to be investigated will generally influence transmitted light too little as to yield a recordable attenuation. However, these structures may still change the velocity of the light by a measurable amount. As a consequence such “phase objects” influence a transmitted light beam by changing its direction and transit time. Schlieren methods take advantage of the deflection effect, and interference methods utilise the phase-shift between light beams. Optical lenses are a special case of phase objects: The velocity of light and the index of refraction (see Sect. 3.2) remain constant within a lens; however, the geometric light path varies. Lenses are calculated so as to produce a prescribed deflection of the light beams and normally serve as means of optical investigations; only at rare events are they themselves test objects. We talk of a “schliere” if a phase object (mostly of unknown structure) influences transmitted light beams via its spatial extent and (or) its locally varying velocity of light (example: phase-contrast microscopy). When investigating two-dimensional temperature or concentration boundary layers the spatial extent is generally constant; such boundary layers are called “schlieren-lenses”.

Boundary Layer Test Section Light Beam Thermal Boundary Layer Phase Object
These keywords were added by machine and not by the authors. This process is experimental and the keywords may be updated as the learning algorithm improves.
This is a preview of subscription content, log in to check access.