The Physical Basis of the Direction of Time 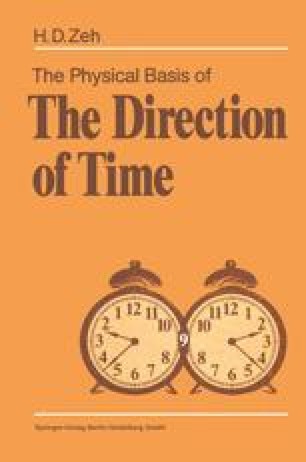 Four weeks before his death Albert Einstein wrote in a letter of condolence to the family of his life-long friend Michael Besso (Dukas and Hoffman, 1979)1: “Für uns gläubige Physiker hat die Scheidung zwischen Vergangenheit, Gegenwart and Zukunft nur die Bedeutung einer wenn auch hartnäckigen Illusion.” There is no doubt that Einstein meant this remark very seriously. It obviously refers to the four-dimensional (‘static’ or ‘objective’) representation of all events in a spacetime frame which his theory of relativity uses so efficiently. This picture seems to be at variance with the subjective experience of a present passing through time (the ‘flow of time’), a concept which his theory allows to be incorporated into the objective picture only as the local moment of a present (the here-and-now) ‘moving’ along a world line. The above remark of Einstein’s is frequently misinterpreted as a statement in support for a merely subjective arrow of time. It is therefore often quoted by the information-theoretical school of statistical mechanics, or even as support for an extra-physical concept of growing knowledge (as used in the idealistic interpretation of quantum mechanics), which fundamentally introduces an extra-physical (‘absolute’) direction of time. The increase of entropy would then also have to be interpreted essentially ‘subjectively’ (referring to subjects gaining information), since this extra-physical concept of knowledge would ultimately determine in which direction of time statistical reasoning has to be applied.

Physical Reality World Line Local Moment Physical Description Kinematical Wholeness
These keywords were added by machine and not by the authors. This process is experimental and the keywords may be updated as the learning algorithm improves.
This is a preview of subscription content, log in to check access.

Cite this chapter as:
Zeh HD. (1989) Epilogue. In: The Physical Basis of the Direction of Time. Springer, Berlin, Heidelberg