Growth Stresses and Strains in Trees 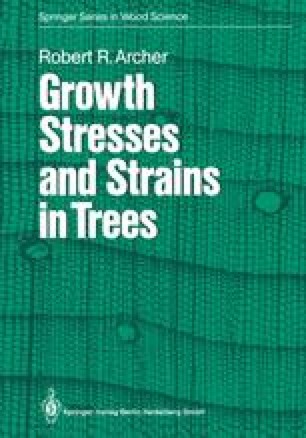 Growth Stresses and Strains in Trees pp 50-65 | Cite as

Mechanisms for the Generation of Surface Strains

Boyd (1972) reviewed the various older theories as to the origin of growth stresses in trees (Martley 1928, Koehler 1933, Münch 1938, Clarke 1939, Jacobs 1945, Wardrop 1965). He then returned to his earlier hypothesis that “the generation of stresses was caused by swelling of the cell due to changes in the cell wall during differentiation”. Watanabe (1965) also took this position and laid special emphasis on the role of the microfibril angle in the S2 wall in influencing the extension or contraction of the cell, but he noted that tension wood was an exception. Boyd (1972) proceeded to develop a mathematical-mechanical model for these anisotropic cell wall mechanisms which will be considered in the next section.

Annual Ring Growth Stress Compression Wood Tension Wood Surface Strain
These keywords were added by machine and not by the authors. This process is experimental and the keywords may be updated as the learning algorithm improves.
This is a preview of subscription content, log in to check access.