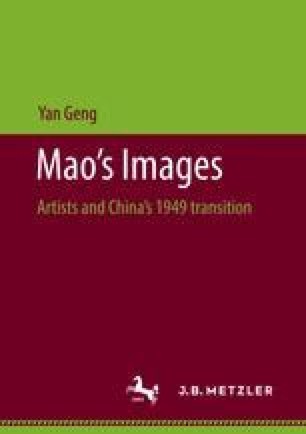 In May 1949, a few months after the Communist army took control of the city of Beijing, Huang Jun, an ink painter who specialized in traditional figures, produced May Day Celebrations (fig. 2.1). The painting depicts a rowdy parade during a celebration of the first Labor Day after the Communist “liberation,” peasants gleefully hoisting portraits of Mao and Zhu De, head of the People’s Liberation Army. Together with more than two hundred pieces from around eighty painters, May Day Celebrations was shown at the New Chinese Painting Exhibition, which opened at the city’s Sun Yat-sen Park on May 13, 1949. Huang Jun’s painting was also selected and reprinted in the People’s Daily, though the paper showed only the left part of the painting, representing the beginning of the parade, with the peasants dancing and the workers holding the banner that reads qingzhu wuyi (May Day Celebrations).