The Case of State Liability 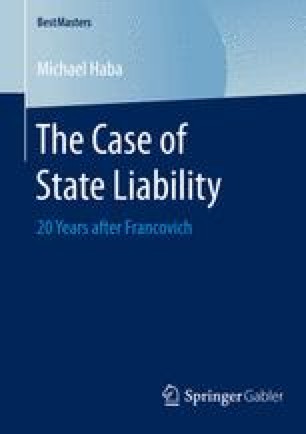 The Case of State Liability pp 1-5 | Cite as

More than 20 years have passed since the case of Andrea Francovich and Danila Bonifaci & Others v. Italian Republic where the European Court of Justice (ECJ) laid down the principle of Member State liability for the very first time. Such a development was quite revolutionary, because State liability, in particular for legislative or judicial breaches, was still an infrequent phenomenon in most European jurisdictions. In fact, an individual seeking claims for damages sustained by State authorities could only rely upon national laws, which at the time were not consistent.

National Court Private Enforceability Judicial Independence State Liability European Jurisdiction
These keywords were added by machine and not by the authors. This process is experimental and the keywords may be updated as the learning algorithm improves.
This is a preview of subscription content, log in to check access.