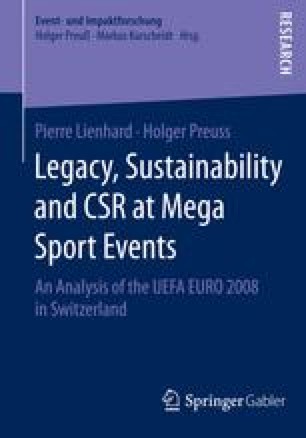 Alongside defining the term ‘event’, the relevant literature has developed five characteristics for distinguishing events: (1) the event schedule, (2) the event strategy, (3) the event period, (4) the event content and (5) the event size (Preuss et al., 2009, 26). While singular events in the area of art and culture (including historical jubilee celebrations and concerts) are considered as being of vital importance, singular events in sports are rather an exception and comparatively limited (ibid.) Events in the area of sport are typically considered as regularly held events within an event series (Kurscheidt, 2006). It is however to be differentiated between guest-events being held from a term of one up to four years at different venues such as World Championship or European Championships of the respective sport federations, or on the other hand the traditional tournaments, which are held at the same venue such as for instance in tennis or golf (ibid.).

Corporate Social Responsibility European Union Corporate Governance Host Country Sport Organization
These keywords were added by machine and not by the authors. This process is experimental and the keywords may be updated as the learning algorithm improves.
This is a preview of subscription content, log in to check access.