Dependencies and Mechanisms of Unemployment and Social Involvement 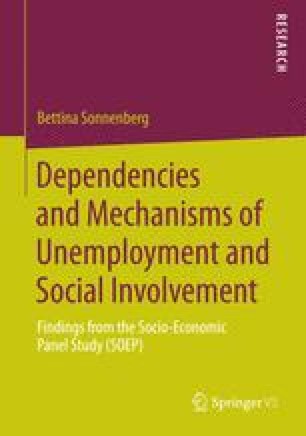 Over the past few decades, interest in social involvement, labor market changes, and unemployment have increased considerably in both scientific and public domains. Social involvement, in other words, engagement in social activities, groups, and networks, is considered to be crucial on the individual and societal level (Franzen and Freitag 2007; Granovetter 1973; Portes 1998). On the societal level, social involvement is thought to reflect and constitute social cohesion and social solidarity (Fukuyama 2001; Portes and Vickstrom 2011). On the individual level, social involvement is associated with access to and gains in resources beneficial for people’s living conditions and their well-being (Coleman 1988; Granovetter 1973; Helliwell and Putnam 2004). Consequently, declines in social involvement have been considered to pose threats to societies’ very foundations (Putnam 2000; Uslaner 1999). Research on social involvement to date suggests that participation varies by macro-structural factors as well as by socio-demographic and socio-economic characteristics such as age, education, and employment status (Gensicke and Geiss 2010; Petersen 2012; Musick and Wilson 2008). Here, employment seems to play a dual role.

Labor Market Social Cohesion Social Integration Societal Level Labor Market Participation
These keywords were added by machine and not by the authors. This process is experimental and the keywords may be updated as the learning algorithm improves.
This is a preview of subscription content, log in to check access.