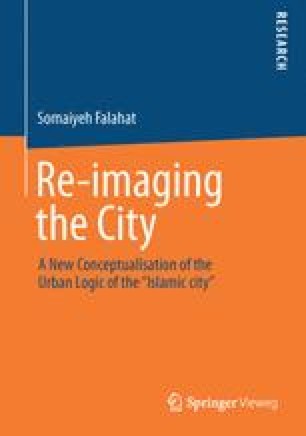 Towards a New Terminology

As has been mentioned in preceding sections, the concept of labyrinth accompanying other epithets such as tortuous, bewildering, winding, irregular, and formless has been applied to explain the structure and form of the street network of ‘Islamic cities’. These attributions have been made by two groups of authors: 1. scholars of the ‘Islamic city’, dating back to the early days of scientific study of this kind of city, when the scholars were strongly influenced by Orientalism; 2. travellers who visited traditional Iranian cities or other cities belong to Islamic countries in various historical epochs; and in two ways: a number of these authors describe the plan and general shape of the cities as labyrinths while others believe that the feelings raised while walking through the city are in some way labyrinthine or labyrinth-like. To examine the accuracy of these attributions, we have studied the two sides of the analogy, the concept of labyrinth and the city. On the one hand, studying the concept of ‘labyrinth’ has revealed that a number of geometric patterns, interpretations, and characteristics have appeared in various historic periods as typical representatives of this concept.

Street Network Conceptual Characteristic Ornamental Surface Sacred Space Frame Story
These keywords were added by machine and not by the authors. This process is experimental and the keywords may be updated as the learning algorithm improves.
This is a preview of subscription content, log in to check access.