Malignant Lymphomas and their Management 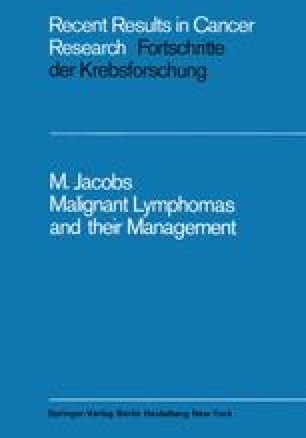 Malignant Lymphomas and their Management pp 1-26 | Cite as

The current classification of the so-called lymphomata into Hodgkin’s disease, lymphosarcoma, and reticulum cell sarcoma is modern. Any historical or scientific review of the subject rightfully begins with a discussion of Hodgkin’s original paper entitled “On Some Morbid Appearances of the Absorbent Glands and Spleen” published in 1832. This classical report describes the clinical and gross pathologic findings in a group of patients whose symptomatology presented striking similarities; notably enlargement of peripheral lymph nodes in the neck, the axillae, and the groin and, frequently, enlargement of the mediastinal nodes. In addition, the patients had enlargement of the spleen and, less commonly, of the liver. Postmortem examination of several subjects revealed pathologic changes of the same nature. In Hodgkin’s observations on the clinical course and progress of the disease, one notes the emergence of a common pattern that was presented by several of the patients.

Follicular Lymphoma Reticulum Cell Sarcoma Groin Dissection Erythema Dose Mediastinal Involvement
These keywords were added by machine and not by the authors. This process is experimental and the keywords may be updated as the learning algorithm improves.
This is a preview of subscription content, log in to check access.