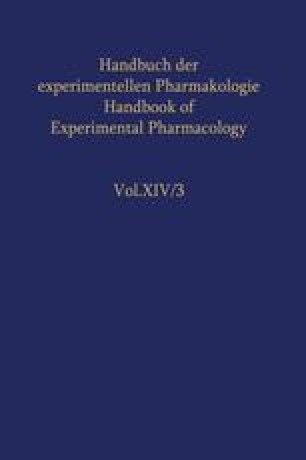 This review deals with pharmacologic, not physiologic actions of 21-carbon hormonal steroids in mammals. The compounds under review are the so-called “glucocorticoids”, as opposed to those C21 compounds that act chiefly on the metabolism of water and electrolytes. [The action of the principal mammalian “mineralocorticoid”, aldosterone, is the subject of a recent, exhaustive and critical review (Sharp and Leaf, 1966).] The term “pharmacologic actions” means simply those hormonal effects observed when amounts of steroid experimentally used in in vitro or in vivo studies are present in concentrations greater than those found or believed to exist under natural or “physiologic” conditions. Some of the studies cited here were carried out before physiologic concentrations of naturally occurring hormonal steroids were known with accuracy. Some were done without much regard for the ultimate concentration of steroid at the cellular level under basal conditions, a quantity which is, in fact, not yet known, although many data are available concerning the concentrations of steroids in various body fluids, e.g., plasma, cerebrospinal fluid, bile, milk, saliva, etc. Therefore, it has not always been possible to distinguish precisely between physiologic and pharmacologic effects. However, it seems highly probable that in most of the work cited the concentrations of hormone used were greater than those achieved under basal conditions by the endogenous secretion of the mammalian adrenal cortex. For cortisol, generally considered the major, i. e., the most abundant glucocorticoid secreted by the human adrenal cortex, the plasma concentration ranges from about 5 to 25 μg per 100 ml with a mean of 10 to 16; the exact number depends upon the method of measurement (C. COPE, 1964a).

“I saw that one inquiry only gave occasion to another, that book referred to book, that to search was not always to find, and to find was not always to be informed; and that thus to pursue perfection was, like the first inhabitants of Arcadia, to chase the sun, which when they had reached the hill where he seemed to rest, was still beheld at the same distance from them.”

The literature covered in this review was published between 1950 and 1965, with a few studies outside that period. The review was finished early in 1967.