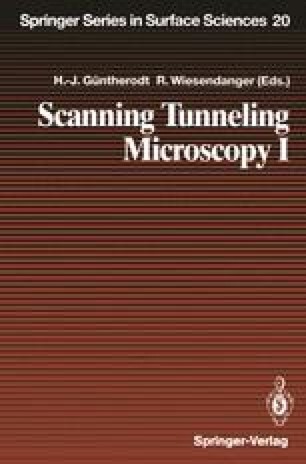 The Rise of Local Probe Methods

Scanning tunneling microscopy (STM) instigated the rapid development of an expanding family of local probe microscopies or, more appropriately, of scanning probe methods. Their basic ingredient is a local experiment which, repeated at sequential locations, can be assembled to form an image. This is also how STM developed. The original goal was to learn about the local structural, electronic, and growth properties of very thin insulating layers, in particular at tunnel junctions. “Local” meant on the scale of the inhomogeneities of those properties, which were believed to be no larger than a few nanometers in size, a scale that was entirely inaccessible with existing techniques. Electron tunneling appeared to be a promising approach, provided it could be done locally. This led in a natural, non-premeditated way to the local probe method “scanning tunneling microscopy”. Electron tunneling already contained two of the four major technical elements of a local probe method: a strongly distance-dependent interaction and, inherently necessary, close proximity of probe and object. One tunneling electrode in the form of a sharp conducting tip would provide the third element, the local probe. Metal tips with a radius of curvature of about 20 nm, which would have brought the resolution to the desired level, were already in use as field emitters and in field ion microscopy. These three elements determine the resolution. The fourth element, finally, was the stable positioning of the probe with respect to the object with an accuracy better than the desired resolution and within the practical range of the interaction. We expected to achieve this with piezo drives made from commercially available material.