A Computational Model of Reasoning from the Clinical Literature 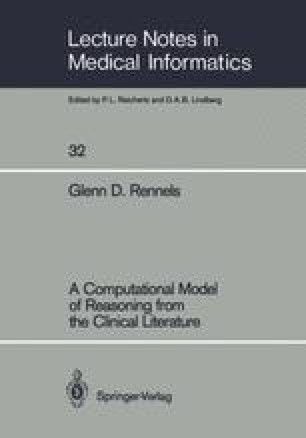 Overview of the Research and the Roundsman System

This chapter presents an overview of the Roundsman project and the Roundsman computer program which is its central focus. Section 3.1 discusses an early stage of the Roundsman project: informal protocol analysis with an expert oncologist. Section 3.2 describes the development of a set of “scripts” which served as targets during program development and also helped to identify the set of publications which were incorporated into the Roundsman library (as described in section 3.3). Section 3.4 breifly presents the hardware and software which were used in program development. Section 3.5 outlines the steps taken by Roundsman when analyzing a case and then describes each of those steps in detail by tracing the execution of the system during an actual consultation.

Axillary Node Radical Mastectomy Wide Excision Intervention Object Comparison Object
These keywords were added by machine and not by the authors. This process is experimental and the keywords may be updated as the learning algorithm improves.
This is a preview of subscription content, log in to check access.