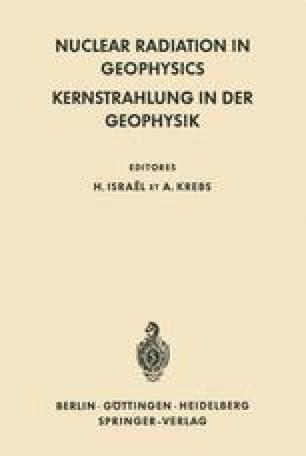 A I. For the radon and thoron decay products, the main sources of natural radioactivity in the atmosphere, natural aerosols act as carriers. The main features of these aerosols are discussed, especially the size distribution and concentration under various geographical conditions, including some data on chemical composition and distribution with altitude. Several processes, predomi-nantly those connected with the formation and evaporation of cloud droplets, will modify the size distributions by growth of individual particles.

A II. The decay products of radon and thoron, RaA and ThA are atoms, which readily become molecular clusters (primary particles) similar to small ions and then in turn become attached to the aerosols (secondary particles). The theory of Smoluchowsky can be applied to this process of attachment and various parameters, such as the half live time of primary particles, the activity ratio of primary to secondary particles and the activity distribution with particle size can be calculated. The agreement with the data available in literature is fair and indicates that the presented model is a good approximation. For longer lived decay products, the removal of aerosols from the atmosphere has to be incorporated in the calculations. Data on the atmospheric residence time of aerosols obtained by the use of radon decay products are critically reviewed.

B. Similar to the decay products of the emanations, the isotopes induced by cosmic radiation can only exist as particles. New data on stratospheric aerosols allows similar calculations as for the radon decay products. It is concluded that most of the isotopes must be attached to particles between 0.02 and 0.2 microns and that the half live of the primary particles is of the order of hours as compared to fractions of a minute in the troposphere.

CI. The structure and chemical composition of close in fallout particles of atomic tests depends considerably on the type of test, i.e., if it is a ground, tower, water or air burst. If no surface material enters the fireball, the particles are formed by condensation and consist of iron oxide with the activity uniformly distributed within them. Surface or tower material may only partly be evaporated or melted, and the result is a variety of particles with the activity primarily deposited on the surface.

CII. The particles of medium range fallout can be characterized by the fact that they are small enough to be carried over large parts of the globe in the first few months after tests, but still large enough to fall out primarily by sedimentation. Activities up to 10−9 C are observed in these “hot” particles, which at times may represent a considerable fraction of the activity in air. Their activity is roughly proportional to their volume and they form only the tail of a size distribution which extends to much smaller particles and represents already part of the long range fallout.

CII. The long range fallout particles are so small that they behave like a gas with respect to meteorological processes. They have residence times in the stratosphere of about a year and are removed from the troposphere primarily by precipitation. The few measurements available from the stratosphere indicate average sizes of a few hundred microns to the tenth of a micron range. After penetration into the troposphere these particles are modified in their size, composition and structure by the same processes which influence the natural aerosols.

CIV. A problem of special interest in the area of reactor aerosols is the absorption of radioactive gases on aerosols. This phenomenon was studied in more detail for Iodine 131, which was released in considerable quantities at the Windscale accident. It appears that absorption of Iodine on aerosols becomes important, when its concentration by weight is about 10−3 the concentration of the aerosol.