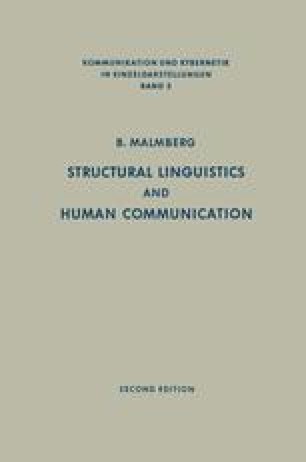 It was pointed out already in Chap. III and IV that certain solid1 distinctions (within the vowel systems the extreme values i - u - a) have to be looked upon as basic in the sense that all languages have at least those oppositions. The distinction stop consonant ~ vowel is the most extreme of all phonemic distinction, whereas fricatives, nasals, laterals etc. are to be regarded as intermediate types and therefore also, in fact, are less general than stops. Some of these contoids may, on account of this, be used as consonants or as vowels. Phonemic fricatives presuppose stops but not inversely. On the syntagmatic level we have pointed out that the open syllable is the most general one and has to be looked upon as more primitive then the closed syllable. Closed syllables suppose open syllables but not inversely. We have also stressed that the primitive (most simple) structures, on both levels, are those which appear first in the child’s linguistic development and those which are the most resistant ones in aphasia. These facts, which were for the first time systematically described, and utilized for linguistic theory, by Roman Jakobson, reflect a basic principle in language structure.