Morphometry of the Human Lung 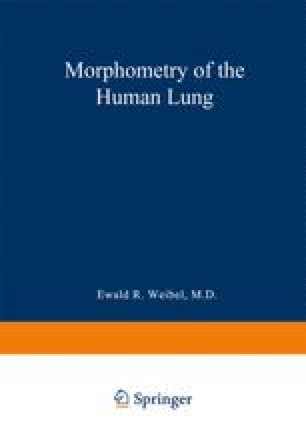 Morphometry of the Human Lung pp 4-9 | Cite as

Organization of the Human Lung

The lung1 contains three basic components: air, blood and tissue. Air and blood are transients and are moving in and out of the organ at a quite rapid rate. The tissue, however, is comparatively stationary. It confines air and blood to separate compartments, forms channels which are suited to lead the air in and out of the lung, or to allow the blood to flow through it. The tissue framework of the lung also insures a constant adequacy of the intricate relations between air and blood. Later on, the architecture of the peripheral parts of the lung will be compared to a fine froth (Fig. 39) in which gases are exchanged between the air bubbles and the blood film surrounding them. An important difference between froth and lung is brought about by the presence of a well organized tissue framework in the latter, which allows the air to be freely exchanged between the bubbles and the environment, and which lets the blood flow continuously through the films, without the necessity of breaking the “froth”.

Human Lung Separate Compartment Normal Human Lung Alveolar Duct Connective Tissue Element
These keywords were added by machine and not by the authors. This process is experimental and the keywords may be updated as the learning algorithm improves.
This is a preview of subscription content, log in to check access.