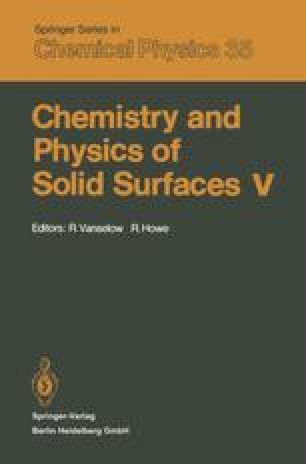 An Atomic View of Crystal Growth

Studies of crystal growth have been of scientific interest at least since the time of Gibbs, but an atomic view of the subject really began to emerge in the 1920s, through the work of Volmer, Stranski, and Kossel [12.1]. From these early investigations, largely based on visual observations or on studies with the light microscope, it became evident that growth from the vapor occurs in a series of steps, shown in Fig.12.1. Atoms from the vapor are captured at a crystal surface on colliding with it. To become part of the crystal they must still reach a growth site, that is a kink in a lattice step. At low supersaturations of the vapor, incorporation can occur only if the lifetime of the adatom on the flat terraces is long enough for the atom to diffuse to a step prior to evaporation. At higher vapor pressures the concentration of adatoms on the flat may be large enough to allow the creation of new nuclei, at which growth can then proceed [12.2]. All of these processes have been nicely illustrated in the Monte Carlo simulations reviewed by Gilmer [12.3]. The creation of epitaxial layers of a foreign material on a crystalline substrate is, however, more complicated [12.4]. As is stressed in van der Merwe’s review [12.5], epitaxy is significantly affected by the strength of the interactions between adatoms as well as between adatoms and substrate. Nevertheless, the atomic events in both crystal and overlayer growth involve the same steps:

and formation of surface clusters.

Crystal Growth Growth Site Atomic Behavior Tungsten Atom Field Evaporation
These keywords were added by machine and not by the authors. This process is experimental and the keywords may be updated as the learning algorithm improves.

Supported by the National Science Foundation under Grant NSF DMR 82-01884.