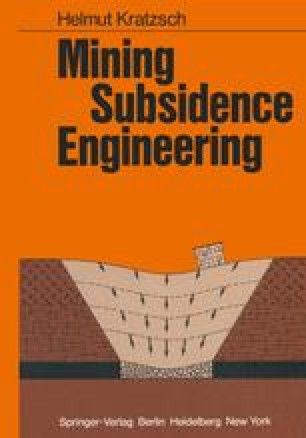 The pre-calculation methods dealt with in the preceding sections are based on the final state of ground movement over a single extraction area. In coal-mining this movement process can be regarded as complete 6 months to 5 years after the halting of operations, but in room-and-pillar working in, say, potash or other ore mining it may not be complete until after 100 years. Consequently, in mine planning and the protection of structures, account must also be taken of the interim development of ground movement resulting from the constant enlargement of the extraction area and its long-term influence. As is known, the local values for subsidence, tilt, and curvature of the ground, as well as of displacement and tensile or compressive strain, alter during the period of working, and a structure which, for example, may end up under compression can in the intervening period be exposed to tensile stress. Figures 237 to 240 show how greatly the trough elements alter during mining activity and how the time-related movement and deformation at a point in the trough can be graphically represented.

Ground Movement Creep Rate Rock Salt Surface Point Mining Stage
These keywords were added by machine and not by the authors. This process is experimental and the keywords may be updated as the learning algorithm improves.
This is a preview of subscription content, log in to check access.