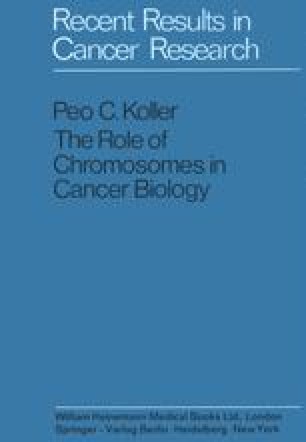 Our present day knowledge concerning the chromosomes of cancer cells may be summarized as follows: (1) in most tumours the cells have an abnormal set of chromosomes and (2) in each case the abnormality is different; no two tumours were observed with identical aneuploid chromosome patterns. There is one striking exception to the above two points: in chronic myeloid leukaemia in man, the Ph’ chromosome appears to be a highly specific morphological marker for this type of malignancy, and is believed by some to participate in the causation of the disease. On the other hand, the lack of any consistency in the chromosomal anomalies observed in human tumours, and their great karyotypic variability, support the view that chromosomal changes are secondary phenomena, resulting from the neoplastic state of the cell. The mitotic abnormalities — so common in premalignant and malignant tissues, are further evidence of a disturbed intracellular metabolism, responsible for the appearance of cells in which the chromosome constitution deviates from the normal diploid state. The configuration of anomalous chromosome patterns is a decisive factor which determines whether the aneuploid cell has proliferative capacity or not. Observation shows that very drastic chromosomal anomalies are tolerated in the neoplastic tissue, because there “they matter less than elsewhere”.