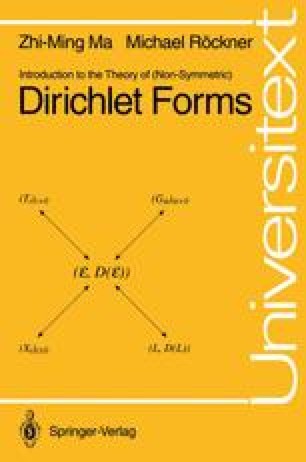 In this chapter we develop some analytic potential theory of Dirichlet forms. We try to keep the amount of material as small as possible but sufficient for understanding the probabilistic part of the theory contained in Chapters IV, V below. The corresponding probabilistic potential theory and the relation between the two is studied in Chapter V, Sect.5, as far as necessary for the purpose of this book. In Section 1 we consider excessive and reduced (or balayaged) functions. In Section 2 we look at the capacities corresponding to a Dirichlet form (ε,D(ε)) and introduce an “intrinsic” notion of ε-exceptional sets. Section 3 contains all on ε-quasi-continuity that we use later. In this chapter we consider the following situation: let E be a Hausdorff topological space. Let B(E) be the σ-algebra consisting of its Borel subsets and m be a σ-finite positive measure on (E,B(E)). Let (ε, D(ε)) be a fixed Dirichlet form on L2(E;m) with associated generator L , semigroups (T t )t>0, (T̂ t )t>0 and resolvents (G α )α>0 , (Ĝ α )α>0 on L2(E;m) . Let K ≥ 1 be a continuity constant of (ε, D(ε)) and, as before, let ε͂ denote its symmetric part. Recall that ε α := ε + α( , ), α > 0, where ( , ) is the usual inner product in L2(E;m) and that ‖ ‖ := ( , )1/2.