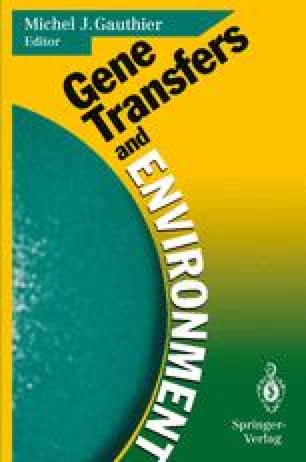 Streptomycetes are an integral part of the soil community and grow as branching mycelia within soil aggregates. In the presence of exogenous nutrients, soil is rapidly colonized by growing mycelia, and the subsequent reduction of nutrients results in spore formation. The spore stage acts as a desiccation and phage-resistant dispersal mechanism. The combination of mycelial growth and dispersal of spores through soil are significant in the spread of genes in a particular population (Wellington et al. 1990). The major roles of streptomycetes in soil include the later stages of decomposition of recalcitrant polymers such as cellulose, lignin, chitin and starch. There is also evidence of a role in pathogen suppression in the rhizosphere via the secretion of antimicrobial compounds. Studying the population ecology of streptomycetes, and their interactions with other bacteria and fungi in the natural environment will give insights into the survival and spread of introduced genes. Such studies may enable predictions to be made about the fate of released genetically engineered microorganisms (GEMs).

Mycelial Growth Host Density Unamended Soil Phage Population Free Phage
These keywords were added by machine and not by the authors. This process is experimental and the keywords may be updated as the learning algorithm improves.
This is a preview of subscription content, log in to check access.

Cite this paper as:
Marsh P., Wellington E.M.H. (1992) Interactions between Actinophage and their Streptomycete Hosts in Soil and the Fate of Phage Borne Genes. In: Gauthier M.J. (eds) Gene Transfers and Environment. Springer, Berlin, Heidelberg