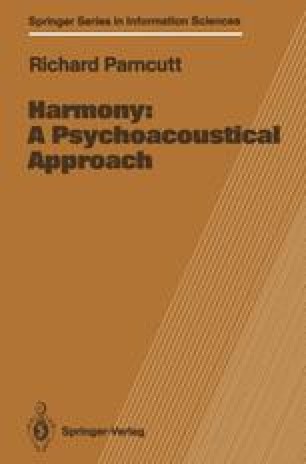 The experiments described in this chapter aimed to provide appropriate data by which the model (Chap. 4) could be developed, tested and fine-tuned. In the multiplicity experiment, listeners estimated the number of tones in musical sounds (full complex tones, octave-spaced tones, bell-like sounds and chords). The pitch analysis experiment measured the saliences of particular tones in musical sounds by a probe tone technique. Four further experiments investigated the apparent similarity of sequential pairs of tones and chords of similar loudness, and its dependence on timbral similarity, pitch distance and pitch commonality. Experimental results were used to establish optimal values for three of the four free parameters of the model. These values were subsequently used in music-theoretical applications of the model (Chap. 6).

Pure Tone Complex Tone Sequential Tone Probe Tone Tone Pair
These keywords were added by machine and not by the authors. This process is experimental and the keywords may be updated as the learning algorithm improves.
This is a preview of subscription content, log in to check access.