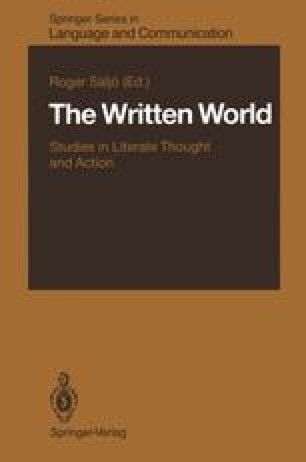 The Impact of Literacy on the Conception of Language: The Case of Linguistics

In recent years, we have witnessed a rapid increase in the number of books and papers dealing with differences between speech and writing, or between orality and literacy, and with the alleged social and psychological consequences of these differences (for references, see e.g. Street, 1988). Very broadly stated, we could say that after a long period of ignoring or belittling differences between speech and writing (the latter was considered basically as a trivial recording or representation of the former), media theorists as well as linguists, psychologists and anthropologists (e.g. McLuhan, Ong, Goody, Olson) started to claim that differences between speech and writing were fundamental and very important, causing far-reaching differences between oral and literate cultures. Later on, in the last few years, we have seen the antithesis of this, scholars claiming that there are many different kinds of literate and oral cultures and that relatively few, if any, properties of these cultures could be derived from the media as such (e.g. Street, 1984, 1988). It seems probable that many scholars who are conversant with the full complexity of the issues involved will opt for a synthesis; most, if not all, differences are thoroughly culture-specific and dependent on technologies, social organizations, and cultural traditions which cannot be understood as simple effects of the use of different media (speech vs. writing), and yet many of these differences are not accidental, given some of the inherent features of universal or prototypical uses of speech and writing. For example, there are bound to be some consequences of the fact that speech is multimodal (i.e., not only oral-acoustic but accompanied by various nonvocal signals) and temporally distributed, whereas writing is unimodal (visual) and spatially organized; or the fact that conversation in face-to-face encounters is highly interactional and the exchange of written messages usually much less interactional (the communication process often being unidirectional).

Literal Meaning Linguistic Analysis Language Science Literate Culture Linguistic Meaning
These keywords were added by machine and not by the authors. This process is experimental and the keywords may be updated as the learning algorithm improves.
This is a preview of subscription content, log in to check access.