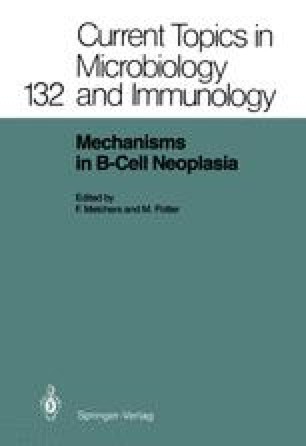 Type II B cell growth factor (BCGF II) was originally detected by its capacity to induce proliferation of the murine B cell lymphoma BCL. in vitro (Swain & Dutton, 1982: Swain et al, 1983). Its effects on normal B cells have not been well defined, since it has proved difficult to separate BCGF II from other potentially relevant factors. We have recently described a novel source of BCGF II which is free of any other lymphokine believed to act on B cells. This activity is produced by a murine T cell hybrid NIMP-TH1, which was selected for its capacity to secrete the eosinophil differentiation factor (EDF) (Warren & Sanderson, 1985: Sanderson et al, 1986). The BCGF II and EDF co-purify in every fractionation procedure employed (Fig. 1): both activities migrate with an approximate Mr of 44,000 (Fig. 2) and a pi of approximately 5.0 (unpublished data). These findings, together with earlier evidence that BCGF II and EDF are co-ordinately produced by a large panel of T cell clones (Sanderson et al, 1985) strongly suggested that the two activities are due to the same molecule, which has therefore been named interleukin 4 (IL-4) (Sanderson et al, 1986). We have examined the effects of this factor on normal murine B cells.

Cell Hybrid Lectin Affinity Chromatography Molecular Weight Weight Glaxo Group Research Mitogenic Dose
These keywords were added by machine and not by the authors. This process is experimental and the keywords may be updated as the learning algorithm improves.
This is a preview of subscription content, log in to check access.