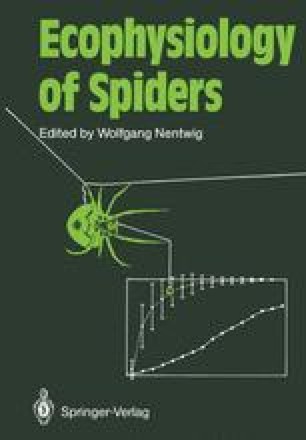 The importance of ecdysteroids in the control of moulting phenomena is well known in insects and crustaceans. Many publications show the wealth of our knowledge in this field. However, research on the hormonal physiology of certain groups of mandibulate arthropods such as myriapods and most chelicerate arthropods began late and only a few contributions have been published for these two groups. In 1968, Krishnakumaran and Schneiderman were pioneers in noting the action of exogenous ecdysteroids on the moulting process in the spiders Araneus cornutus and Dugesiella hentzi. But it took 10 years for steroid hormones to be detected and dosed for the first time in an arachnid: the spider Pisaura mirabilis (Bonaric and De Reggi 1977). Since then, the development of research has made it possible to extend our knowledge to the other orders of arachnids, such as mites, harvestmen and, to a lesser degree, scorpions.

Juvenile Hormone Moult Cycle Nymphal Stage Midgut Gland Moult Hormone
These keywords were added by machine and not by the authors. This process is experimental and the keywords may be updated as the learning algorithm improves.
This is a preview of subscription content, log in to check access.