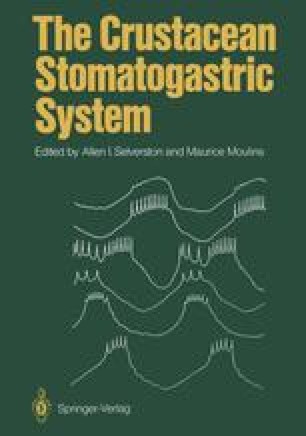 Comparison with Other Systems

The crustacean stomatogastric nervous system is only one of several invertebrate “motor” networks which have been analyzed in considerable detail over the last 20 years. Such “model” systems have proven to be particularly advantageous for the study of behavior because of the small numbers of neurons involved. The output, patterns, which have been examined in greatest detail, are those which are cyclic, and as a result offer special advantages to the experimenter. Initially, the goal of these studies was to identify the neurons involved in generating the fundamental oscillatory pattern and to determine the synaptic connectivity between them. With such basic information it was hoped that the mechanisms which were involved could be ascertained.

Synaptic Connectivity Excitatory Drive Cardiac Ganglion Bilateral Pair Rhythmic Output
These keywords were added by machine and not by the authors. This process is experimental and the keywords may be updated as the learning algorithm improves.
This is a preview of subscription content, log in to check access.