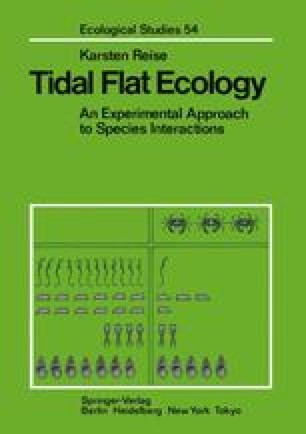 The Open Community on Tidal Flats

Tidal flats are a physically harsh environment for marine organisms. This has prompted ecologists to seek explanations for the pattern of species abundances and distributions entirely in terms of the physical factors in the environment such as sediment qualities and hydrographic conditions. The experiments on species interactions described in this book do not imply the irrelevance of the physical approach, but document that it is insufficient to explain the observed patterns. A harsh physical environment does not preclude species interactions and their strong effects on community structure. Refined interactions, however, are unlikely to evolve in a variable environment and the biotic interactions can be most severe (Sanders 1979). The experiments suggest a prevalence of predation on the tidal flats. This predation is intermittent and somewhat balanced by multiple predation between the predators themselves. There are also refuges for prey populations and temporal escape from predator control occurs occasionally. This allows competive and promotive processes to modify the patterns generated by physical effects and by predation.

Tidal Flat Open Community Prey Population Tidal Zone Predator Control
These keywords were added by machine and not by the authors. This process is experimental and the keywords may be updated as the learning algorithm improves.
This is a preview of subscription content, log in to check access.