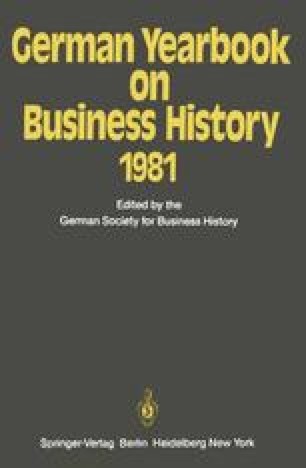 The growth of the iron and steel industry before the First World War is seen in literature as closely related to the development of the major German banks. Helmut Böhme pointed out a few years ago, however, that modern research is largely based on theoretical work as the factual basis is uncertain.1 The difficulty of obtaining adequate source material raises a number of problems in an attempt to establish the significance of the banks for the development of enterprises in the iron and steel industry in the Ruhr. The records of the major banks for the period up to 1914 appear to be lost. There are virtually no public records for this field. It is therefore only possible to make statements concerning the relation between the banks and enterprises in the iron and steel industry on the basis of the archives of the enterprises themselves.

Steel Industry Supervisory Board Joint Stock Company Share Capital Steel Work
These keywords were added by machine and not by the authors. This process is experimental and the keywords may be updated as the learning algorithm improves.
This is a preview of subscription content, log in to check access.