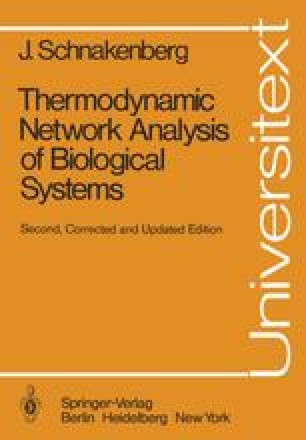 Particularly in the preceding Chapter 6 we have seen the significance of stability properties for biological network models. This experience leads us to devote the present chapter to a development of quite general techniques for a stability analysis of networks. Such an analysis can be performed under two different aspects: a thermodynamic aspect, which relates stability to thermodynamic properties of the network like entropy production and the second laws and a nonthermodynamic aspect, which derives the stability properties from the mathematical structure of the differential equations represented by the network on the basis of a topological analysis. This latter aspect is very exhaustively worked out in the network theory of CLARKE (1980). Sections 7.1 to 7.4 of this chapter will be devoted to the thermodynamic aspect and in Sections 7.5 to 7.7 we briefly describe a few simple techniques to obtain information on stability from a topological analysis.

Closed Loop Entropy Production Global Behaviour Autocatalytic Reaction Nonequilibrium Steady State
These keywords were added by machine and not by the authors. This process is experimental and the keywords may be updated as the learning algorithm improves.
This is a preview of subscription content, log in to check access.