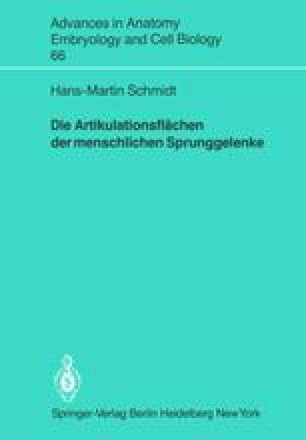 The ankle and subtalar joints in man are located at the distal end of the shank and between proximal tarsal bones. They are remarkable in the human locomotor apparatus in that they support the body when standing erect and during unimpeded locomotion. During evolution, changes in form and function have appeared, especially on the articular surfaces of both ankle and subtalar joints. These qualitative evolutional changes have long since been noted and described in both anatomical and anthropological literature. Yet, quantitative data have been published only in limited amounts. Therefore, on the basis of 105 different measurements, we have investigated osteometrically all the bones that build up the two ankle and subtalar joints. For our measurements we used macerated right and left single bones, assembled foot skeletons and cadaver specimens made from the feet of adults of both sexes. For the first time we have recorded the characteristics of these joint surfaces in a series of comprehensive measurements and have analysed them statistically. Profiles of curvatures of the articulating bodies were investigated with a new method of modelling using an elastomer material based on silicon rubber. We have also checked for possible variations.