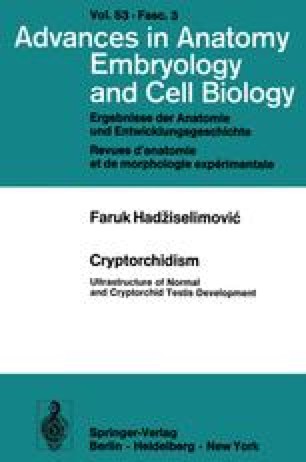 The main problem in the therapy of cryptorchidism is how to preserve fertility. In this connection, attention today is undoubtedly focussed on the question of early treatment. The fact that this is regarded as imperative is based on the following considerations: The secondary changes in cryptorchidism are clearly visible at the ultrastructural level as early as the second year. Collagenisation and widening of the tunica propria, which assume greater proportions with increasing age, are accompanied by the disappearance of spermatogonia from the seminiferous tubule. The significant fall in the spermatogonia cell-count from the second year onwards has, in the meantime, been confirmed by several authors (Hedinger, 1971 ; Hoesli, 1971 ; Hecker et al., 1972; Städtler and Hartmann, 1972; Jendricke, 1976). At the same time, the tubules decrease in diameter and take no part in puberal development (Hecker 1977). The atrophic changes are very marked in the third year, as histometric examinations carried out in our clinic confirm (Liidin, 1976). The decisive question, namely whether the spermatogonia recover and increase in number after operation was put forward by Kleinteich and Schickedanz (1976), who carried out histological studies on 157 testicles from patients who had undergone operation for unilateral or bilateral cryptorchi-dism two to ten years previously. The mean spermatogonia content per cross-section of one seminiferous tubule in each testicle was determined from fifty circular tubulus cross-sections. The value for the treated testicles was then compared with that obtained from untreated cryptorchid testicles in the same age-group and was found to be appreciably higher in the operated testicles than in comparable untreated testicles.

Leydig Cell Seminiferous Tubule Atrophic Change Decisive Question Leydig Cell Function
These keywords were added by machine and not by the authors. This process is experimental and the keywords may be updated as the learning algorithm improves.
This is a preview of subscription content, log in to check access.