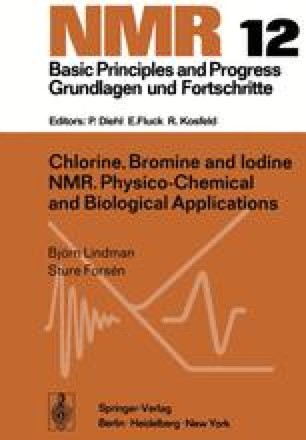 Scalar spin coupling between magnetic nuclei has for a number of these marked influence on the appearance of their NMR spectrum and the determination of spin-spin coupling constants is then a straight-forward procedure for simple systems. In the case when one of the nuclei involved in the scalar coupling has a spin relaxation rate which greatly exceeds the spin coupling constant, no effect of the coupling is discernible in the NMR spectrum of the two nuclei. (This was illustrated in Fig. 2.5.) Since Cl, Br and I in covalent environments are characterized by very effective relaxation direct determination of spin coupling constants from spectral fine structure is in general impossible — cases where the halogen resides at a site of tetrahedral or octahedral symmetry, or nearly so, are notable exceptions (see Fig. 2.6). As a consequence of this, the number of spin coupling constants for Cl, Br and I given in the literature is small and in most cases they have been obtained indirectly from the scalar spin relaxation of a non-quadrupolar nucleus (cf. Section 1.5). Reports in the literature have mainly dealt with problems of determination of the spin coupling constants while detailed analyses of the results are almost non-existent. In the following section a description of the experimental aspects and results as well as a tentative interpretation will be given. In the present section the general theory of scalar spin couplings will be outlined to provide a basis for the discussion.

Spin Coupling Scalar Coupling Spin Coupling Constant Octahedral Symmetry Absolute Sign
These keywords were added by machine and not by the authors. This process is experimental and the keywords may be updated as the learning algorithm improves.
This is a preview of subscription content, log in to check access.