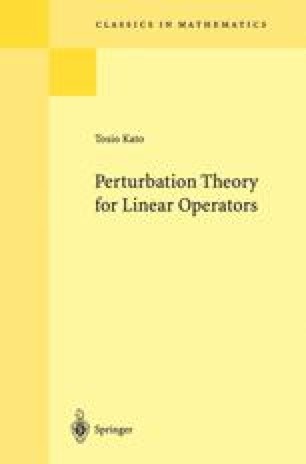 Chapter
Part of the Classics in Mathematics book series (volume 132)

In a finite-dimensional unitary space, the notion of a sesquilinear form and that of a linear operator are equivalent, symmetric forms corresponding to symmetric operators. This is true even in an infinite-dimensional Hilbert space as long as one is concerned with bounded forms and bounded operators. When we have to consider unbounded forms and operators, however, there is no such obvious relationship. Nevertheless there exists a closed theory on a relationship between semibounded symmetric forms and semibounded selfadjoint operators1. This theory can be extended to non-symmetric forms and operators within certain restrictions. Since the results are essential in applications to perturbation theory, a detailed exposition of them will be given in this chapter2. Some of the immediate applications are included here, and further results will be found in Chapters VII and VIII.

Hilbert Space Sectorial Form Symmetric Operator Symmetric Form Selfadjoint Operator
These keywords were added by machine and not by the authors. This process is experimental and the keywords may be updated as the learning algorithm improves.
This is a preview of subscription content, log in to check access.