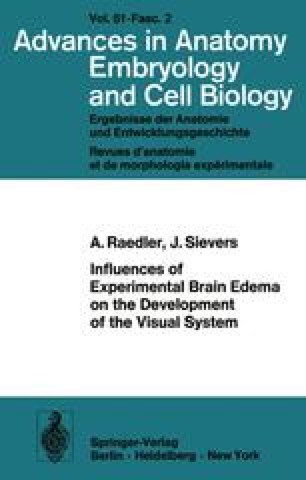 The experimental brain edema as a result of application of numerous different toxic agents has been the subject of a large number of publications (for synopses see Hirano, 1969; Long et al., 1965). A concept that took the underlying causes of the lesions as the basis for classification of different types of brain edema was presented by Klatzo (1967). In this classification Klatzo differentiates between cytogenic and vasogenic causes of brain edema that are distinguishable from each other by the differing behaviour and reaction of the blood-brain-barrier. The vasogenic type of brain edema is found mostly in the vicinity of tumors, traumata and foci of infections, presumably because of an alteration of the conditions of permeability, as well as in brain edemas that are caused by changes in the hemodynamics of the central nervous system, and toxic substances that act directly on the wall of the blood vessel. The cytogenic type of brain edema in many experimental models is the result of, for instance, TET-intoxication, water intoxication, poisoning with other chemical substances and anoxia. Its direct cause according to Klatzo (1967) is to be seen in a disturbance of the intracellular osmoregulation of the parenchymal cells. Although the composition of the edema fluid is dependent on the type of toxic substance used, the lack of plasma proteins in the edema fluid is characteristics for the brain edemas of this group.

Immature Brain Toxic Substance Brain Edema Aluminium Hydroxide Toxic Agent
These keywords were added by machine and not by the authors. This process is experimental and the keywords may be updated as the learning algorithm improves.
This is a preview of subscription content, log in to check access.