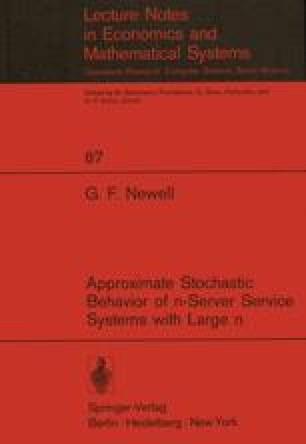 Chapter II dealt mostly with the behavior of systems for which the expected service time E{S} was comparable with the duration of the rush hour, but, in any case, E{S} was large compared with the time spent going through any transition period when it was uncertain as to whether there was a queue of customers or of servers. The analysis was fairly straightforward, though, at times, somewhat tedious, because we chose to consider a more or less arbitrary curve E{Ac(t)} for the expected number of arriving customers, which varied considerably on a time scale comparable with the service time. The complications were due mostly to a variety of possible shapes of the curves E{Ac(t)}, E{D(t)}, etc., in the deterministic approximations. Stochastic effects were relatively small but also easily handled because they did not accumulate.

Service Time Queue Length Equilibrium Distribution Traffic Intensity Stochastic Effect
These keywords were added by machine and not by the authors. This process is experimental and the keywords may be updated as the learning algorithm improves.
This is a preview of subscription content, log in to check access.