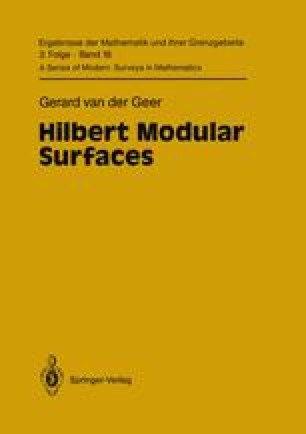 The Classification of Hilbert Modular Surfaces

In the next two chapters the emphasis is on the geometry of Hilbert modular surfaces. Algebraic surfaces are classified by the growth of their plurigenera, which roughly speaking is a way of measuring the ampleness of the canonical divisor class. On Hilbert modular surfaces we have in some sense two “canonical divisor classes”, the usual canonical class c 1 (Ω 2 ) and the class c 1(Ω 2(logD)) with D the divisor resolving the cusps. The second one is more natural for Hilbert modular surfaces, but by using the first one the standard theory of algebraic surfaces becomes available. Since the difference D of c 1 (Ω 2 (logD)) and c 1 (Ω 2 ) is relatively small if the volume of Γ\ℌ 2is big one expects in general that the two classes behave similarly.

Blow Down Algebraic Surface Elliptic Surface Irreducible Curve Quotient Singularity
These keywords were added by machine and not by the authors. This process is experimental and the keywords may be updated as the learning algorithm improves.
This is a preview of subscription content, log in to check access.