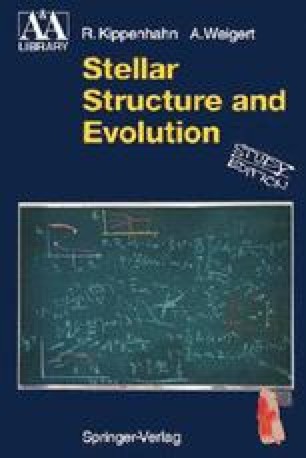 Simple Models in the U-V Plane

There are stars in which the nuclear energy generation proceeding close to the centre creates such a high energy flux that the whole central region is convective. These stars can be described by models with a convective core and a radiative envelope. In later stages of stellar evolution the nuclear fuel in the central region of the star is exhausted and nuclear burning takes place only at the surface of a burned-out core. Under certain circumstances these models with shell burning can be described by a core that is isothermal, since no energy has to be transported there, and that is surrounded by a radiative envelope. In both cases a core solution of one type has to be fitted to an envelope solution of another type. In the following we shall deal with a classical fitting procedure which in the past was often used to construct models for such stars (see SCHWARZSCHILD, 1958; WRUBEL, 1958) and which gives valuable insight into some of their general properties. Moreover, procedures like this can be helpful in certain special cases where the usual, iterative numerical methods are not practicable.

Stellar Evolution Envelope Curve Convective Core Core Solution Nuclear Burning
These keywords were added by machine and not by the authors. This process is experimental and the keywords may be updated as the learning algorithm improves.
This is a preview of subscription content, log in to check access.