Evolution and Adaptation of Terrestrial Arthropods 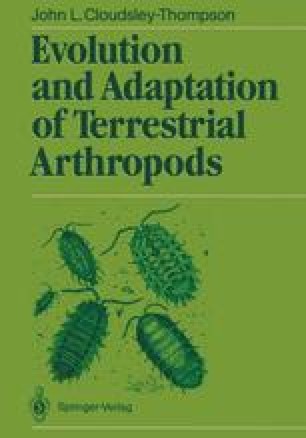 Evolution and Adaptation of Terrestrial Arthropods pp 57-79 | Cite as

Arthropods evolved in the sea, from the same ancestral stock as that from which the annelids arose. Reproduction can take place in several different ways in aquatic environments. Many marine taxa, including coelenterates, molluscs and echinoderms, merely shed their sexual products into the water, where the eggs are fertilized. Although this method is extremely simple, nevertheless the sexes must be in fairly close proximity to ensure union of egg and sperm, whose vitality is of limited duration. Furthermore, the reproductive activity of the sexes must be synchronized. It is usually correlated with the tides and phases of the moon. Efficiency is improved when the sexes come together, as in Limulus, the male fertilizing the eggs as soon as they have been laid. Even so, this could not take place on land without eggs, sperm, and the resulting zygotes and embryos suffering from desiccation.

Oribatid Mite Copulatory Organ Sperm Transfer Genital Atrium Genital Opening
These keywords were added by machine and not by the authors. This process is experimental and the keywords may be updated as the learning algorithm improves.
This is a preview of subscription content, log in to check access.