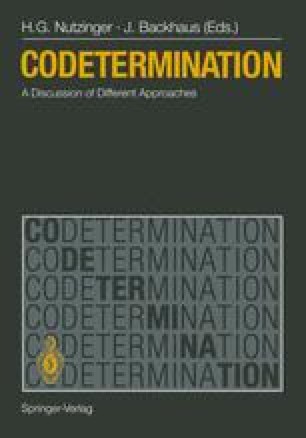 Participation and Codetermination in a Perfect and an Imperfect World*: Comment

Thomas Eger and Peter Weise (hereinafter E-W) have contributed to the small but growing literature that attempts to show that the predominant form of capitalist economic organization under freedom of contract is inefficient owing to informational and contracting costs. More specifically, human capital is disadvantaged because of its lack of appropriability, and legislative correction, for example, in the form of codetermination laws for large firms, can improve welfare — of workers at least.

Nash Equilibrium Large Firm Venture Capital Competitive Equilibrium Profit Sharing
These keywords were added by machine and not by the authors. This process is experimental and the keywords may be updated as the learning algorithm improves.
This is a preview of subscription content, log in to check access.