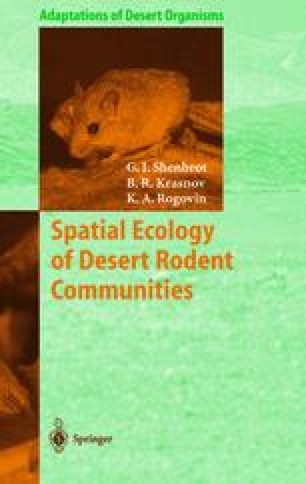 Rodents are found in many different deserts and each species uses its environment in its own manner. In order, therefore, to extract some generalizations, a common approach that permits us to compare patterns of environmental resource utilization among the different species and regions is necessary. This approach can be based on the concept of the ecological niche of a species in terms of its characteristic resource utilization. The term “niche” was proposed as early as the beginning of the century (Grinnell 1917) for the description of the place of a species in an ecosystem, i.e. as a distributional unit of a species. Later, Elton (1927) defined niche as a functional concept for the description of the role of a species in an ecosystem in terms of its relations to food resources and predators, i.e. the position of a species in its trophic interactions. There are several explicit reviews of the history of the niche concept (e.g. Vandermeer 1972; Whittaker 1975; Pianka 1978; Giller 1984 etc.). Here we want only to emphasize that there are some differences in modern understanding of the term “niche” and these differences are derived from the initial differences between the definitions of Grinnell and Elton. The main difference between these two approaches is the sphere of application of the term: Grinnel’s approach connects it with a species, whereas Elton’s definition is connected with an ecological function. Consequently, it is correct to speak of “empty niches” within the frame of Elton’s definition, but is impossible using Grinnel’s concept. It is necessary to point out that usage of the term “niche” in this book is based mainly on Grinnel’s approach.

Habitat Selection Niche Breadth Landscape Unit Gobi Desert Habitat Generalist
These keywords were added by machine and not by the authors. This process is experimental and the keywords may be updated as the learning algorithm improves.
This is a preview of subscription content, log in to check access.