Vibrations of Shells and Rods 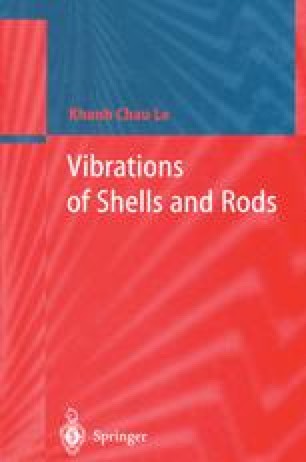 A shell may be constructed geometrically by means of its middle surface and its thickness as follows. Let S be a two-dimensional smooth surface in the three-dimensional Euclidean space ɛ, bounded by a smooth closed curve ∂S (in the case of closed surfaces ∂S = ∅). The surface is described by a vector equation

where r is a smooth vector-value function of two variables x1, x2. At each point of the middle surface we restore the segment of length h in the direction perpendicular to the surface so that its centre lies on the surface. If the length h is sufficiently small, the segments do not intersect each other and fill some domain B ⊂ ɛ (see Figure 3.1). A linear elastic body occupying the domain B in its stress-free undeformed state is called an elastic shell, the surface S its middle surface, and h its thickness. A plate is the special case of the shell, whose middle surface is plane. The shell is said to be thin if h is much smaller than the characteristic sizes as well as the radius of curvature of the middle surface

Dispersion Relation Cylindrical Shell Dispersion Curve Strain Energy Density Circular Plate
These keywords were added by machine and not by the authors. This process is experimental and the keywords may be updated as the learning algorithm improves.
This is a preview of subscription content, log in to check access.