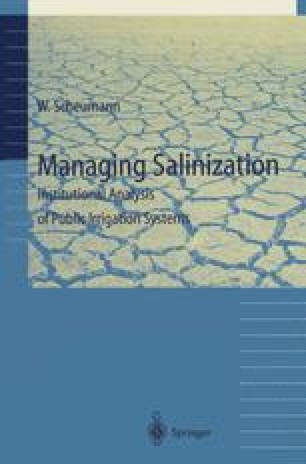 During the last four decades, irrigated agriculture has provided the major share of the increase in world crop production with 36% of the total crop production coming from less than 15% of the arable land that was irrigated. The annual expansion of irrigated land which made this positive development possible, increased by 1% in the early 1960s, and reached its maximum of 2.3% per year between 1972 and 1975; the rate then began to decline in the mid-1970s. According to World Bank/ICID statistics, the irrigated area expanded from 1953 to 1970 by about 5 million ha per year; from 1970 to the early 1980s the rate still averaged about 4 million ha/year. Then, however, the rate of expansion declined and, since the early 1980s, has reached not more than 2 million ha per year.2

Irrigate Land Irrigation Scheme Irrigation Project Water Market Water User Association
These keywords were added by machine and not by the authors. This process is experimental and the keywords may be updated as the learning algorithm improves.
This is a preview of subscription content, log in to check access.