The Pineal Organ, Its Hormone Melatonin, and the Photoneuroendocrine System 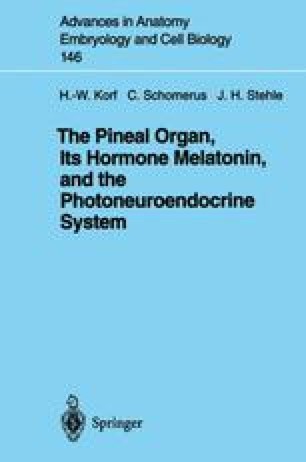 The Pineal Organ, Its Hormone Melatonin, and the Photoneuroendocrine System pp 45-58 | Cite as

According to current concepts, the highly lipophilic melatonin is not stored within the pinealocytes but is released into pineal capillaries immediately after its formation. Thus the secretion of melatonin appears to be controlled solely by its biosynthesis, which is catalyzed by four distinct enzymes: TPH, aromatic L-amino acid decarboxylase, NAT, and HIOMT (Fig. 4). In all vertebrate species studied so far, melatonin reaches its maximal concentration during the night and is nearly undetectable during daytime. This rhythm has been shown to depend on the large increase in concentration and activity of the NAT that occurs night by night and increases the concentration of N-acetylserotonin which accelerates melatonin synthesis through a mass action effect on HIOMT (Fig. 4). Thus NAT appears as the rate-limiting enzyme of the melatonin biosynthesis and as a molecular interface at which all inputs regulating melatonin production and secretion converge. These inputs are provided by endogenous (circadian) oscillators and photoreceptors.

Vasoactive Intestinal Peptide Melatonin Secretion Pineal Organ Melatonin Production Melatonin Synthesis
These keywords were added by machine and not by the authors. This process is experimental and the keywords may be updated as the learning algorithm improves.
This is a preview of subscription content, log in to check access.