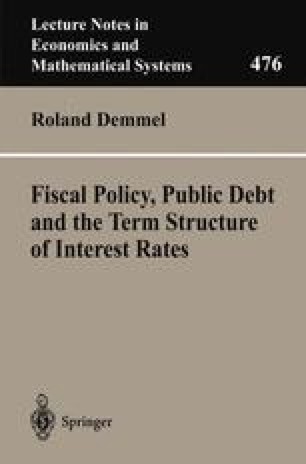 In this thesis, we have studied the interaction of fiscal policy and financial market behavior in a dynamic general equilibrium model of a real, closed economy. Output was produced via a linear production function with capital as sole input. The private sector was introduced as a representative household solving its intertemporal consumption and saving/investment problem subject to its dynamic budget constraint. The structure of the financial market was characterized by the exogenously given types of assets: capital, short-term government bonds, private sector bonds of free maturity. The public sector was described by exogenously given rules regarding taxation and public spending. Resulting fiscal deficits drive public debt. Public debt appears only in form of short-term government bonds. In case public debt happens to be negative, this is equivalent to the government being in a creditor position relative to the private sector.

Interest Rate Fiscal Policy Term Structure Public Debt Debt Ratio
These keywords were added by machine and not by the authors. This process is experimental and the keywords may be updated as the learning algorithm improves.
This is a preview of subscription content, log in to check access.